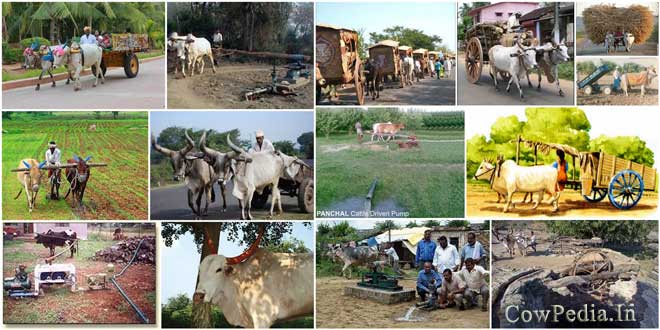 The male animals are good for work and Cows are poor milk yielder are their milk yield as an average is less than 500 kg per lactation. They are usually white in color. A pair of bullocks can haul 1000 kg. Net with an iron typed cart on a good road at walking speed of 5 to 7 km per hour and cover a distance of 30 – 40 km per day. Twice as much weight can be pulled on pneumatic rubber tube carts. The example of this group Kangayam, Umblacherry, Amritmahal, Hallikar. 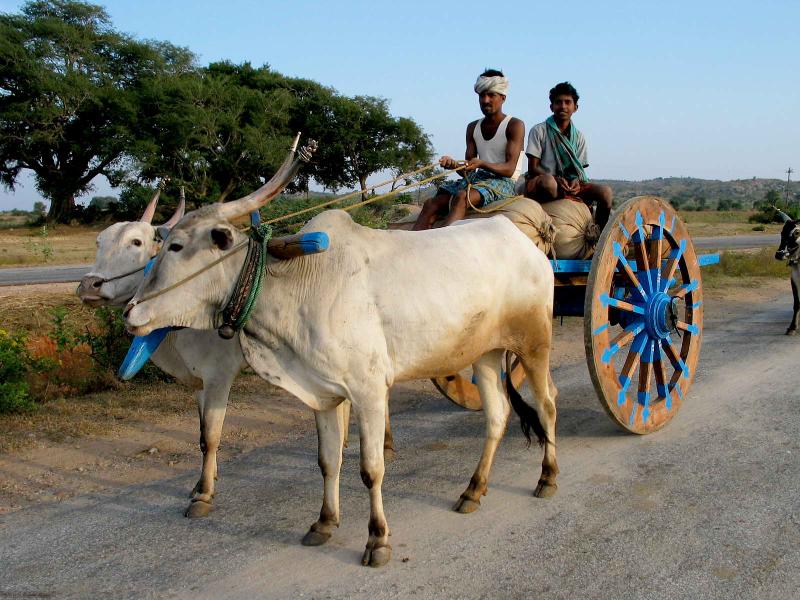 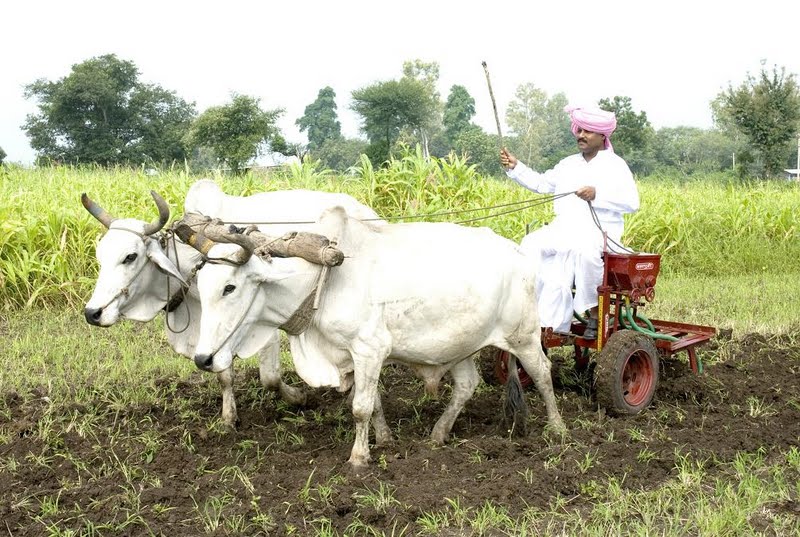 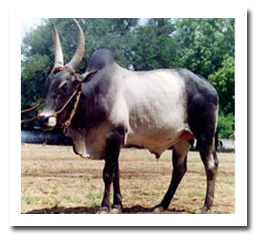 Kangayam is a draught breed of cattle and distributed in Kangayam, Dharapuram, Perundurai, Erode, Bhavani and part of Gobichettipalayam talukas of Erode district, Dindigul, Karur and Coimbatore district.

On the other hand, replacement of Kangayam cattle by exotic crosses is high in Udumalpet, Pollachi, Palladam and Tirupur talukas of Coimbatore, and Erode district.

This breed is most closely related to the Umblachery breed of cattle. Kangayam animals are well built and heavier than Umblachery cattle and are found in drier climate, whereas Umblachery are found in the hot humid tract.

• At the time of birth its skin color is red and after 6 months it turns Grey
• Cows are grey or white and grey. However, animals with red, black, fawn and broken color are also observed. Such animals comprise approximately 1 to 2 % of the total population.
• Horns, muzzle, eyelids, tail switch and hooves are black. Skin is also black.
• Animals are active with compact body and strong physique.
• Legs are short and stout with strong hooves.
• Hump and at the leg joint, the color is grey whereas the rest of the body of bulls is red /black and that of an ox is grey
• Milk yield ranges from 600 to 800 Kg with an average of about 540 Kg in a lactation of about 270 days. Average fat and SNF is 3.88 + 0.07 and 6.96 + 0.05 % respectively.
• Ox have the capacity to work in very hot days too.
• Best suited for ploughing and transport. Withstands hardy conditions. 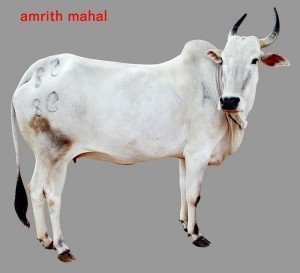 The Amritmahal cattle breed is found in Hassan, Chikmagalur and Chitradurga districts of Karnataka state in southern India. It is a famous draught breed known for its energy, power and endurance. Bullocks are especially-suited for quick transportation. These cattle consisted of three distinct strains: Hallikar, Hagalvadi and Chitaldoorg.

• Color ranges from white to black
• Face, nose and tail are evenly black, in older breed, these parts are lighter
• Color of this breed is white, male is off white and color of bulls ranges from deep to light brown.
• Head is long and tapering towards muzzle. Forehead is narrow, bulging out with a furrow in the middle. Horns are long and emerge from the top of the poll fairly close together in backward and upward direction, turn in and end in sharp black points. Sometimes the long, sharp points touch each other and appear like torch light.
• Eyes are shiny, ears small and placed parallel to the earth
• Hump is fully developed and slightly bent forward, legs are medium in length and in proportion to the rest of the body
• Skin is thin, oily deep black in color and furry
• Udder / Milk glands are small, compact & hard
• Dewlap/ neck wrinkles are small and not too long
• Hoofs/heels are small and hard
• An adult male weighs around 500 kg and female around 318 kg.
• Age at first calving is 1, 337.6±115.52 days and milk yield is 572±24 kg. Calving interval is 577.6±24.32 days and lactation length 299± 10
• Best suitable for ploughing and transport. 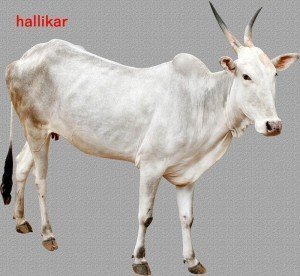 Hallikar cattle is typical Mysore type of cattle found mainly in Mysore, Mandya, Bangalore, Kolar, Tumkur, Hassan and Chitradurga district of Karnataka. It is one of the best draught breed of southern India. In the entire tract bullocks are given special attention. Price of each bullock ranges from Rs. 5, 500 to Rs 10, 000. Females are being used for all kinds of farm operations. They can also work in waterlogged fields and contribute to the farming system.

• Color is grey to dark grey with deep shading on the fore and hind quarters. Frequently, there are light grey marking on the face, dewlap and under the body.
• Hallikar cattle are medium sized, compact and muscular in appearance.
• The forehead is prominent giving a slight bulgy appearance and is furrowed in the middle.
• The face is long and tapers towards the muzzle, which is usually grey to black.
• Horns emerge near each other from the top of poll and are carried backward for nearly half their length and slightly inward toward the tips which are black and sharp. Horns almost touch the neck in front of hump when the animal is feeding with its head downward.
• Eyes are small and clear.
• Ears are small tapering to a point.
• Dewlap is thin and moderately developed.
• Tail is fine with a black switch which reaches little below hocks.
• Age at first calving ranges from 915 to 1, 800 days with an average of about 1, 370 days.
• Lactation milk yield is around 540 kg ranging from 227 to 1, 134 kg. Lactation length ranges from 210 to 310 days averaging of about 285 days.
• Fat is about 5.7%.
• Bullocks are strong, well spirited, quick and steady in the field as well as on road. 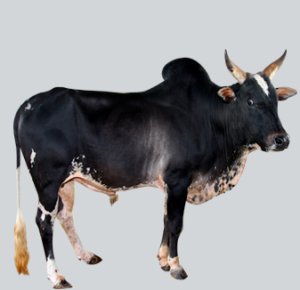 a1 milk vs a2 Milk Benefits & Side Effects
0 replies