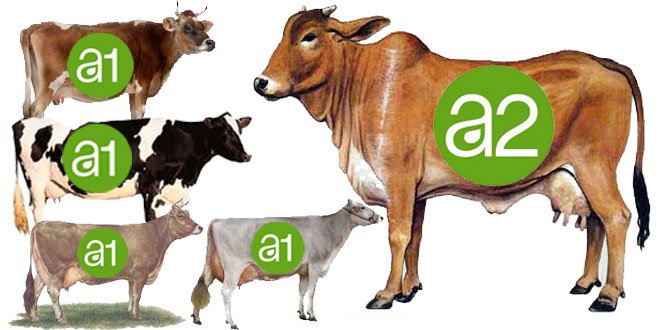 The National Bureau of Animal Genetic Research has recently demonstrated the superior milk quality of Indian Zebu (humped) Cattle breeds especially cow milk. After scanning 22 cattle breeds, scientists concluded that in five types of cow high milk-yielding native breeds – Red Sindhi, Sahiwal, Tharparkar, Rathi and Gir – the status of a2 Beta – Casein gene was 100 per cent. In other Indian breeds, it was around 94%, compared to only 60% in exotic breeds like Jersey cattle and HF cow.

What is a2 Milk Benefits?

Many of us not aware of a2 Milk Health Benefits. a2 Milk is 100% natural fresh desi cow’s milk which you may find easier to digest than regular cow milk. Here’s why: Cow milk contains different types of proteins – including the ones called a1 and a2. These two proteins digest quite differently from each other and, for some people, the presence of a1 protein can result in discomfort after drinking milk. It is thanks to Dr. Corran Mclachlan back in 1997, that the impact of this difference in proteins was discovered and the importance of it came into the picture. He advised us not to take in use a1 cow milk which provides us Jersey cow and HF cow mostly in India.

a1 Milk Side Effects / Disadvantages 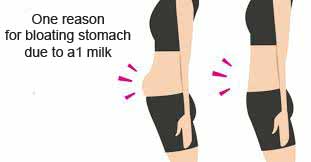 Do you experience digestive issues when drinking milk? You may feel bloated and uncomfortable after breakfast, or get indigestion when you have milk in your tea? Lots of people feel the same and many of them assume that they may be lactose intolerant. For millions of people, this may not actually be the case. Instead, they may be reacting to intolerance to the a1 protein – found in most milk sold in India today.

The cows make all the difference! Desi cows naturally produce milk containing only the a2 protein and no a1 protein. If you also have experienced digestive issues as a result of a1 protein intolerance, by switching to desi cow’s milk you too can now enjoy the nutritional benefits of a2 Milk.

[layerslider id=”1″]Here is a fight a1 milk vs a2 milk. A1 milk is mostly given by basically two types of cow within India which includes Jersey cow and Holstein Friesian cow (HF Cow). During digestion, proteins in jersey cattle milk are broken down into peptides. Most of the peptides are converted into amino acids to be absorbed by the bloodstream. But all peptides do not get broken down into amino acids. Some are excreted in our stools and some manage to get through the leaks in the gut wall into the bloodstream while still in peptide form. a1 milk releases a peptide called BCM 7 ( Beta Caso – Morphine 7). This peptide is not broken down into amino acids, making it impossible to digest and has been associated with a very large number of diseases. Thus this BCM 7 is the “Devil in Milk” Which is not present in desi cow’s Milk.

BCM 7 is a peptide, released in a1 milk.

How did it form?

BCM 7, is the “Real Devil in the Milk”, It is an Exogenous opioid which does not occur naturally with human body and interacts with human digestive system, internal organs and brain stem.

Milk is one of the richest food sources of calcium, which helps to build strong bones and healthy teeth. According to the Dairy Council, a 200ml glass of cow milk can provide over half (55%) of a child’s daily calcium requirement and over one third (35%) for an adult. As calcium is present only in very small amounts in most common foods, it may be difficult for individuals who are restricted in their intake of milk and milk products to obtain the recommended amount.

Milk is naturally full of other essential vitamins and minerals. A 189 ml serving of milk is a source of B6, Folate, Biotin and Zinc and is packed in protein riboflavin (B2), B12, calcium, potassium, phosphorus and iodine.

All cows make beta-casein – but it is the type of beta-casein that matters. There are two types of beta-casein: a1 and a2. They differ by only one amino acid. Such a small difference can have a big impact on people who are a1 milk protein intolerant.

Feeling the difference with a2 Milk

These differences in protein composition between a2 Milk and other milk varieties mean that you may feel the difference after drinking a2 Milk and find that your body prefers it.

Common Issues associated with a1 milk