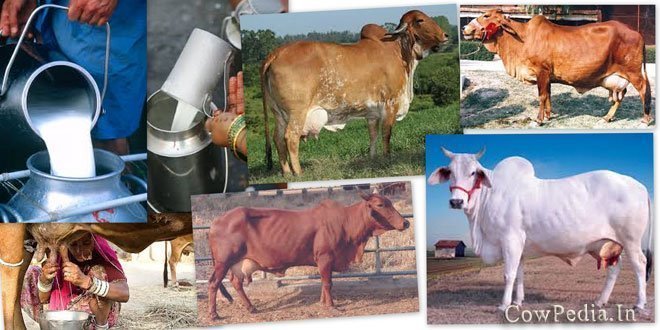 The cows of these breeds are high milk yields and the male animals are slow or poor work animals. The examples of Indian milch breeds are sahiwal, Red Sindhi, Gir and Deoni The milk production of milk breeds is on the average more than 1600 kg per lactation 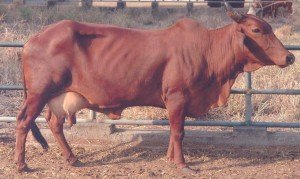 Red sindhi is a distinguished milch breed of Upmahadweep.

It is mostly found in Karachi and Hyderabad districts of Pakistan. Some organized herds of this breed are also found in India in the states of Punjab, Haryana, Karnataka, Tamil Nadu, Kerala and Orissa. The original herd was established at Malir outside Karachi.

Lal Sindhi cattle are somewhat similar to Sahiwal and may also be related to Afghan and Gir cattle. Red Sindhi is one of the important dairy cattle breeds in Indian sub-continent.

• This breed has distinctly red color.
• Red shades vary from dark red to dim yellow. Though patches of white are seen on dewlap and sometimes on forehead, no large white patches are present on the body.
• In bulls, color is dark on the shoulders and thighs.
• Hair is soft and short, and skin is loose.
• Milk production is around 1, 840 kg(range 1, 100 to 2, 600 kg) and lactation length 296 days . Under good management conditions the Red Sindhi averages over 1700 kg of milk after suckling their calves but under optimum conditions there have been milk yields of over 3400 kg per lactation.
• Fat is around4.5% 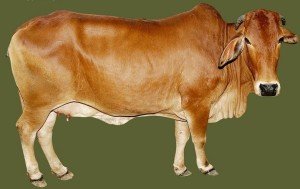 The Sahiwal is one of the best dairy breeds of zebu cattle.

Though its original breeding tract lies in Montgomery (now Sahiwal) district of Pakistan, yet some herds are also found in India along the Indo-Pak border in Ferozepur and Amritsar districts of Punjab, and Sri Ganganagar district of Rajasthan,  Haryana, U.P, Delhi, Bihar and M.P.

Sahiwal breed is being utilized widely for improvement of local stock or for the purpose of initial crossbreeding. It is known to have been introduced into 17 other countries, besides Pakistan and India. These are: Mauritius, Kenya, Tanzania, Sierra Leone, Malaysia, the Philippines, Vietnam, Thailand, Myanmar, Bangladesh, Sri Lanka, Nepal, Brazil, Jamaica, Trinidad, Australia and New Zealand. 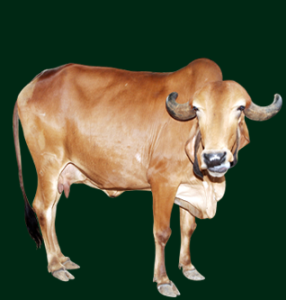 The Gir is a famous milk cattle breed of India. The native tract of the breed is Gir hills and forests of Kathiawar including Junagarh, Bhavnagar, Rajkot and Amreli districts of Gujarat. The Gir animals are famous for their tolerance to stress conditions and resistance to various tropical diseases. Bullocks of this breed are used to drag heavy loads on all kinds of soil. Brazil, Mexico, USA and Venezuela have imported these animals where they are being breed successfully. These animals contribute significantly to the total milk production of Gujarat State. The Rabaris, Bharwads, Maldharis, Ahirs and Charans tribes are mainly involved in Rearing of Gir cattle. They move with their cattle from one place to another in search for grazing. The Gir animals are also kept at different Gaushalas (cow barns) in Gujarat State.

• Coat color of Gir animals varies from shades of red and white to almost black and white or entire red. Skin color is dominantly black but in a few animals it is brown, has red/white and black/white or completely red haired cows can be seen
• Forehead is prominent, convex and broad like a bony shield. This overhangs eyes in such a way that they appear to be partially closed and the animal shows sloppy appearance.
• Ears are long and pendulous and folded like a leaf.
• The tail is long and whip like.
• Hooves are black and medium-sized.
• Hair is short and glossy,
• Skin is loose and pliable
• Hipbones are prominent, the body is well proportioned, the udder in cows is well developed
• Age at first calving in Gir cows is 52.49 months
• Average lactation and 300 days milk yield in 378 Gir cows is 1775 and 1449 kg, respectively.
• Gir Cow Milk yield   – Under village condition : 900 kg
• Gir Cow Milk yield    – Under commercial farms: 1600 kg

• Deoni is a medium heavy animal. It is found in three color variations viz. Wannera (clear white with black colour at the sides of the face), Balankya (clear white with black spots on the lower side of the body) and Shevera (white body with irregular black spots).
• The body is moderately developed and symmetrical with distinct muscles.
• The colour of the head is black and white in Wannera and Shevera and completely white in the Balankya strain.
• The forehead is prominent, broad, slightly bulged and white in all the strains
• Ears are long and drooping with slightly curved tips
• Horns are medium, thick, apart and emerge from the sides of the poles, Tips of the horns are blunt
• Eyes are prominent, bright and alert with black eyebrows.
• The neck is short, strong and well developed. Dewlap is thick, pendulous, and muscular with folds. It is more pendulous in males than in females.
• The tail is long reaching below the hock with black and white switch.
• The udder is well attached and medium in .size with squarely placed black teats.
• The animals are docile and calm.
• Lactation milk yield in Deoni herds ranging from 800 to 1000 kg.
• Average Fat percent of 4.29 is observed in 100 samples of Deoni cow milk.

a1 milk vs a2 Milk Benefits & Side Effects